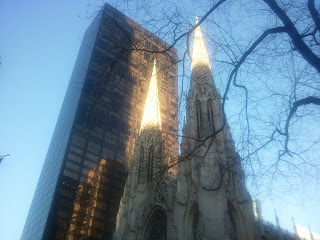 Here's a lovely poem about the miracle of turning around a corner in NYC and seeing a gothic cathedral in the midst of the buildings of retail and finance.  That certainly was the image Mark caught in the image here, taken last month.  Enjoy the picture and poem.


In Europe you can see cathedrals
from far away. As you drive toward them
across the country they are visible—stony
and roosted on the land—even before the towns
that surround them. In New York you come
upon them with no warning, turn a corner
and there one is: on 5th Avenue St. Patrick's,
spiny and white as a shell in a gift shop; dark
St. Agnes lost near a canal and some housing
projects in Brooklyn; or St. John the Divine,
listed in every guidebook yet seeming always
like a momentary vision on Amsterdam
Avenue, with its ragged halo of trees, wide stone
steps ascending directly out of traffic.

Lately I have found myself unable
to pass by. The candles' anonymous
wishes waver and flame near the entrance, bright
numerous, transitory and eternal
as a migration: the birds that fly away
are never exactly the same as those that return.
The gray, flowering arches' ribs rise
until they fade, the bones so large and old
they belong to an undetected time
on earth. Here and there people's small backs
in prayer, the windowed saints' robes' orchid
glow, the shadows—ghosts of a long nocturnal
snow from a sky below when we did not yet
exist, with our questions tender as burns.

"Everything but God" by Anne Pierson Wiese, from Floating City. © Louisiana State University Press, 2007. Reprinted with permission. (buy now)
Posted by Anita C. Fonte at 9:53 AM No comments:

Well, folks, I guess I need to shine the light a bit brighter to get your interest since no new followers have been added to my blog.

My next BrightSpots posting will be about one of two "brightspots" and I will let you choose:

1.  A sunset run in Sabino Canyon
2.  A new community garden

Which one do you want to "shine the light on?"
Posted by Anita C. Fonte at 7:34 PM No comments: 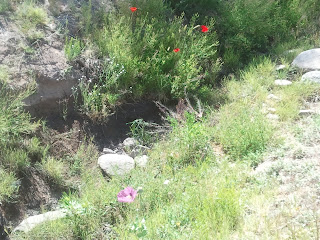 Here's a natural miracle along the northern sidewalk on Mountain Ave. in Tucson, just west of the fenceline of UA Farms. Catching winter's light rainfall and sheltered from the hot sun, a cluster of red primroses pop up from the rocky soil.
This image is the Spring symbol of the launch for "BrightSpots" by AnitaWrites. Please join us as we explore other images and short posts and, possibly create, face-to-face as well as online ways to highlight small miracles that demonstrate change that is happening.
Posted by Anita C. Fonte at 4:35 PM No comments: Links to this post

I love the color yellow: yellow blouses (and variations on that color), yellow butterflies, yellow sunflowers, yellow daffodils. I love the word "daffodil"--it sounds funny and light, just how the flower appears. When it's a tight bud, the flower looks like a loose nozzle hose; then it opens and reminds me of the kind of bicycle horns I used to have on my Schwinn when I was a kid. Wordsworth had a more lyrical impression of the flower--what is yours?

It was on this day in 1802 that William Wordsworth (books by this author) and his sister, Dorothy
(books by this author), happened upon a profusion of
daffodils along the banks of the nine-mile-long Ullswater Lake. Dorothy
wrote down a detailed description of the daffodils that helped inspire
Wordsworth to write the famous poem "I Wandered Lonely as a Cloud" five years
later. It begins:

I wandered lonely as a cloud
That floats on high o'er vales and
hills,
When all at once I saw a crowd,
A host, of golden
daffodils;
Beside the lake, beneath the trees,
Fluttering and dancing in
the breeze.

Congress approved the formation of the
Works Progress Administration on this date in 1935. The WPA was created
by President Franklin Roosevelt to relieve the economic hardship of the Great
Depression. The program employed more than 8.5 million people on 1.4 million
public projects before it was disbanded in 1943. Many of the WPA's projects
involved manual labor, but it also included literary and arts programs like the
Federal Writers' Project, which gave jobs to writers such as Nelson Algren, Saul
Bellow, John Cheever, Ralph Ellison, Zora Neale Hurston, Margaret Walker, and
Richard Wright. Critics of the program said it encouraged laziness and shoddy
work, and claimed the acronym really stood for "We Poke Along," but Nelson
Algren said: "Had it not been for [the Writers' Project], the suicide rate would
have been much higher. It gave new life to people who had thought their lives
were over."from 4/8/12, The Writer's Almanac with Garrison Keillor

It seems to me that we continue to have this tension about support of artists, the value of culture and the role of government--over 70 years later. When I walk the sidewalks of urban neighborhoods in Tucson and Phoenix, I see the WPA "stamp" in the concrete. Much of the work at Sabino Canyon and Mt. Lemmon (where we went today/Easter Sunday and saw patches of snow on the northern slopes along with gentle streams of water and green shoots of grass, tree buddings and pine saplings spreading new needles) was done by the WPA. Can we at least find some agreement that public works do benefit the common good--even if we disagree about what the "common good" looks like?

Does the concept of happiness through reasoning have meaning for you? I consider how, when I plant a seed, measure the depth of soil and its content, place the pot so that it catches a certain slant of light (thank you Emily D.)--my actions are guided by reason, and so, in that instance, I am experiencing eudemonia. Can you conjure up moments of eudemonia in your life?

1. Happiness; well-being.
2. Aristotelianism. Happiness as the result of an active life governed by reason.

We all seek eudemonia, but he thinks that it takes
a great deal of reflection and education to get a clear enough conception of it
really to aim at it in our practice.
-- Robert Campbell Roberts, Intellectual Virtues

They may have believed that we already do value duty, utility, and eudemonia, but it is debatable whether they need to make such
descriptive claims.
-- Jesse J. Prinz, The Emotional Construction of
Morals

From Aristotle, eudemonia comes from the Greek word eudaímōn
which meant "a good or benevolent spirit."