Apology to my indoor succulent plant

You have roots curling in brown water and need to be potted.  But I enjoy the way western sunlight shines on your petals and even the brown water glistens.

Apology to my cat

I have to step over you or around you and often I trip on the red rug I crocheted for you.  I am clumsy sometimes and need to practice my balance.

Apology to my office

You serve a purpose and yet I often ignore you because the computer beckons me to write and do bills.

Apology to my rocking chair

You comforted me in my teen years and I took you to my college dorm.  I brought you to Arizona and you warmed me as I rocked my young son into sleep.  Yet now, I use you to hold my scarves and haven't sat on your cushion in years.

Posted by Anita C. Fonte at 3:59 PM No comments: Links to this post

My memory of bedtime stories

My memory of bedtime stories begins with my Grandmother Dice (my mom's mom), reciting "Little Orphant Annie" and "The Raggedy Man" (by James Whitcomb Riley).  My sister, cousin and I cuddled under woolen blankets in the attic bedroom at my grandparents' farmhouse on Randall Road in Elgin, Illinois.  I didn't learn until years later than my grandmother and my mom grew up entertaining other farming families by poetry and dramatic reading recitations.  One of  mom's childhood favorites (also by JWR) was "Our Hired Girl".

Grandmother would perform her stories on the side of the bed and end with "Had a little calf; that's half.  Put him in a stall; that's all."  Those lines meant: no more stories, no more trips downstairs to go the to the bathroom; it's time for bed.  And she meant it.  A couple of time I tried tiptoeing down the creaking stairs and she'd be waiting for me at the bottom.  "March right back up young lady!" was her command. Sometimes a hard swat would follow if I tried to resist.

Mom's nighttime routine included hand gestures, voice inflections, and tolerance for "just one more."  She never seemed to tire of sharing her performances.  Later, when my sister and I became early readers, we had the "Big Big Story Book" and illustrated fairy tales.  Sitting on each side of her on one of our twin beds, my sister and I would lean in and look at the pictures as she read in her mesmerizing dramatic voice.  I loved "The Wild Swans" and "Beauty and the Beast" because both stories were long and mom never stopped a story before the ending.

Mom continued this tradition with her grandson and two granddaughters--but not as often as she would have liked.  She made sure I understood that moving from Illinois to Arizona meant she expected more grandchildren sleepovers than what she experienced.  I think our son (being the first born) benefited most from her talents and she expanded her performances with him to include silly songs such as "On Top of Spaghetti" (sung to the song "On Top of Old Smokey") and "How much is that Doggie in the Window?".

I started reading to her grandson when he was a month or so old.  The family tradition continued (I only needed a quick "read me a story" anytime of the day) until he was 12 years old.  I read all of the C.S. Lewis  books twice and several books by Brian Jacques--along with Pooh stories and fairy tales, of course.

In my late 50's, I began to volunteer read at elementary schools and the public library.  The last story I read aloud to 5th graders was "The Little Prince" which had been published as a pop-up book.  We learned about astronomy, love, adventure, and death from that amazing story.

Entering my 7th decade now, I occasionally still read children's stories to myself.  I hear the harmonic voices of my mom and my grandmother in my head.  Sometimes I see my mom's gestures in the moonlight.  These memories create a sweet bedtime song I hope to sing for many more nights. 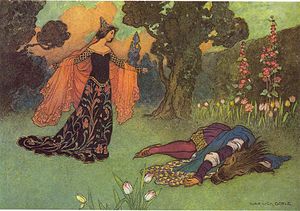 Posted by Anita C. Fonte at 3:20 PM No comments: Links to this post