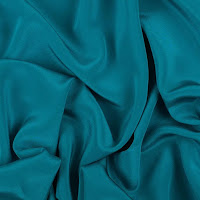 Nora Bergatti wore the teal blue and gold scarf around her shoulders.  An early autumn wind off Lake Michigan picked up the silk  fabric, stroking her cheek as Mama used to do.  Seeing her husband, Hugh, depart for the airport that morning, Nora knew that being alone for a week was an opportunity to explore the unpacked art files in her office.  She removed the scarf from her shoulders and rolled it into a ball, tucking it into her satchel. As she walked up the steps to the museum, she patted one of the two marble lions on his head--a gesture of habit since she and Mama visited the exhibits every month in thirty-five of Nora’s forty years.  Even with Mama gone, the habitual gesture recalled those visits.

But Nora was unaware that when Hugh returned, she would not be the same woman.  The blue scarf in the satchel knew this.  Since 1885, it carried all its memories between its threads of blue and gold--

My story is an old one, but not as old as the scarves made before me.  Each of them as a story, too.  But this is mine.  My makers weren’t weavers.  They were textile workers who came from farms in disarray.  The centuries old feudal system in Italy, as in most of Europe, was gone.  Peasant farmers were free, but as poor as ever.  They had land, but no tools to work the land.  Their former masters now could enslave them in debts for tools, for housing, for food.  So many of them left the hills, such as my textile workers.  They came from the Abruzzo region and entered Roma, looking for jobs in the newly built factories that were close to water and land transportation.  The trains came in the late 1880s so workers could live in the cities, work, earn some money, and return back to the farms to work their land.

These workers didn’t bend and weave the silk threads.  The threads continued to come to Europe over the Silk Road from Asia.  The workers learned how to operate the silk through the steam-powered Jacquard mechanisms.  These machines cut textile labor by half and so costs could be reduced.  There was a new middle class emerging that wanted the finer goods that only the rich used to be able to purchase.  The new machines changed everything and transportation also became less hazardous and more efficient.

A new style of design for patterns came from France, called Art Nouveau.  In Italy, it was called Arte Nouva or Stile Foral.  The designs were made in sinuous lines, whiplash curves, flowing lines, expressing a new freedom and release from traditional textile designs.  This design style affected the visual imagination of women who felt the flowing lines in their hands.  The sense of energy for a new life for women slowly came into the daily life of those who could afford the fabrics.

Such is the story of my first owner, a woman named Maria Fontevilla who lived in Fiesole.  Fiesole was an ancient Etruscan village, but Maria was from Roma.  She had married Raphael ten years before the blue scarf entered her life.  Then, Raphael had completed his legal studies.  Now, he was the Mayor of Fiesole and he bought me from a shop in Rome while finishing a legal case in the city.  It was the eve of his tenth anniversary to Maria.  Lately, she had been more subdued than usual.  In these ten years, the third baby was a fussy one and the other two boys were at an active age.  So sleep for his wife was a rare visitor.  Raphael saw the silk scarf and thought, with its golden threads woven like a river around its edges, Maria would be reminded of Roma and happier times in their marriage.

So I was wrapped in parchment paper, rolled into a bundle that could fit in the carriage behind Raphael’s work papers and we went up the steep hill to Fiesole. My long life as an accessory to three women and one man’s stories had begun.  Like her great-niece Nora, Maria was unaware how my presence would change her forever.

“Here you are, my lovely.  You might have thought I forgot our anniversary, but I did not.”  Raphael offered the paper bundle to the woman sitting at the table who held a baby nursing at her breast. The baby sniffled and Maria pushed it away and wiped its milky lips with a cloth.  She looked up at Raphael with a slight smile.

“Well, you are forgiven then.  For forgetting to say as much to me before you left.  So busy you were with your life in the city.”  Maria sighed and placed the baby in a cradle next to the table.  “Now you are fed, Claudia, please be content for a few moments.”

She took the rolled bundle from her husband and untied the raffia string, slowly unwinding the parchment paper.  A hint of blue like the ocean appeared.

“What is this, Raphael?”  Maria's smile widened.

“Something new I saw today.  I liked the colors as they shone in the window.”

“Oh, my."  Maria unwrapped the scarf and the glints of gold caught in the setting sun, the blue fabric rippling like liquid in her hands.

“It is so beautiful.  So fine.  Too fine for a weary mother like me.”

“No.  It is perfect for you,  For a new mayor’s wife.  You will wear it to the next town meeting to show everyone you are a lady of this village.”  Raphael picked up the scarf and looped it gently around his wife’s long neck like a bracelet.  It fell across her full breasts and his eyes lingered.

Maria touched the silk and a current of energy from it flowed into her fingers.  Then the energy flowed into her quickening heart.  Her eyes opened up to see the sun in the window and, for the first time in months, her legs felt strong again.  “I am a lady of this village.  I am more than a milk cow, cook, cleaner, and nurse to little boys’ colds and knee scrapes,”  she murmured.

Yes, I whispered into her blood as it flowed throughout her body.  I was made of silk from China, tended in a silkworm farm by a Chinese farm girl.  She blessed the silk with her pure heart and mind and now her soul is mixed with yours.  My magic has begun.