1.  The tone was civil and productive.
2.  Some participants are coming for the first time to sessions which have been developing over 2 1/2 years.
3.  The elements of economic development and growth are interrelated and yet, we, as a public representing neighborhoods, government and businesses, don't seem to be ready to talk about them as interrelated elements and are not yet willing, therefore, to examine them with their benefits and trade-offs.

Quick notes from 6/20/13  City of Tucson General Plan meeting on language and growth map, particularly as they apply to neighborhood and area plans; note no direct attribution but only initials of those quoted are in  (    ) parenthesis —by a.fonte/community renaissance (CR)


Topic 1:  for Chapter 4 of the General Plan—suggested additional language, which, after 45 mins. of discussion was approved “for now”. (JH)  The suggested and approved text reads:


Any amendment, consolidation, deletion, or modification of any neighborhood or area plan will be subject to the same public processes that are required during a neighborhood or area plan amendment, and all public input, including the input of the affected residents, will be maintained as part of the public record that is forwarded through these public processes.
Key comments noted by CR:
·         “It’s as a good a document as we can get….”  (RB)


·         “Suggest that a future meeting examine how the current public processes are working….” (RB)

Topic 2:  The Growth Area Map—City of Tucson facilitator, Rebecca Ruopp and city staff explained that the state law requires that the 10 year General Plan address future growth; it does not require a map but, staff noted, most cities are now using maps to suggest future growth areas. Tucson has not had such a map for previous plans; this is new.   After 60 mins. of discussion, the map was approved with a) a new title that emphasizes it is a vision/scenario map and b) the map explanation of how to use and not use the map be moved to the map itself and increased in font size so that readers of the map cannot miss it or “cut it” off from a printed map.


·         The scenario model uses policies that will be in the recommended General Plan; these policies emerged from the 2 ½ year public participation process for the Plan.


·         The Map does not regulate nor is it a map for future zoning; it is a “starting place” for possible refinement of neighborhood, area and other land use plans.


Handouts of the City’s proposed Map, an alternative map presented by one of the participants, Growth Areas Map Use Language and Attachment A were distributed to all participants.
Posted by Anita C. Fonte at 3:31 PM No comments:

We tough Tucsonans who stick around in June (and throughout the summer) find ways to celebrate our lives here and it's really not that hard if a person has access to a cooling system during the day but gets out and about during the cooler temps (early a.m. or after sunset).  Last evening, we had a light dinner at Fronimo's on Speedway, a favorite, reliable Greek restaurant, and then decided to check out the new Bookman's Sports Store nearby.  We were delighted with the interior which, in addition to a wide and affordable selection of used and new sports gear of all kinds, also offers several antique pinpall machines, HD flatscreen tvs (all on sports channels, of course) and free WiFi with cafe tables and chairs.  The restored brick interior is cool and spacious and another place to add to the "go to" sites for both cooling off and connecting to others.  Here are three pics from our visit. 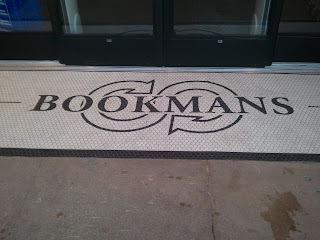 The bicycle and baseball figures are "dummies in motion"! 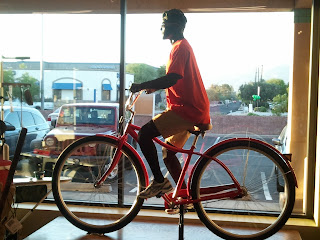 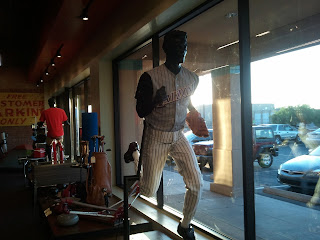 Feeling a bit energized from the Bookman's experience (lots of good energy in the place and chatting with the knowledgeable sales people was fun), we decided to head downtown for one of Tucson's Second Saturdays.
Bright Spot #2:
We walked up and down Congress Ave., listened to rock n' roll, jazz (a wonderful rendition of "Summertime" played by a saxaphonist sprayed in silver so he probably does a street-statue scene as well), watched graceful belly dancers (BellyDancingTucson.com), and shared a small, but still decadent cup of salted caramel ice cream from The Hub.  Lots of families, seniors, young adults mulling around the food trucks and arts and music venues and, at 7-8 p.m., Tucson was just beginning to open up from a 106 degree day!  This shot was at the beginning of our walk and, an hour later, with Mark's camera battery dwindling, we couldn't snap-and-share a picture of the growing crowd, darkening skies, and festive lights on the streets.  Maybe next month:). 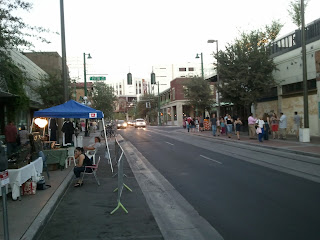 It's reassuring to know that other Tucsonans understand and appreciate the connection I am trying to make between the concepts of happiness and social capital.  My Talk UP^ Tucson... book is just one tool for encouraging this connection.  Here's a blog from an architect who supports the book and the ideas:  http://urbanuniversityinterface.com
Posted by Anita C. Fonte at 3:51 PM No comments: