Bits and Pieces of Children's Writing

Bits and Pieces from the prompts in Children’s Writer’s Notebook
A.A. Milne
Inventing characters from your childhood and write a 300 word adventure
Brownie:  stuffed collie dog; Teddy: teddy bear; Oma: sock like toy; Mortimer:  Mickey Mouse toy; Lulu:  finger puppet
Location:  Reid Park, Tucson
It was a sunny day for an adventure at the park.  For three days it rained and the five friends were stuck inside the adobe house.  But the with sun reappearing, Mortimer woke and cried, “It’s play day.  Let’s go to the park!”

“Not before I brush my fur.”  Brownie stroke his golden ears with his paw.

“Let’s go somewhere to explore,” challenged Mortimer as he tightened his red vest and grabbed is black walking stick.

“Ohh.  Not some place too scary,” cooed Oma.  “And I need to eat my breakfast first.  I am a growing girl.”

“I say we make our breakfast a picnic in the park.”  Lulu hopped to the cupboard and began to pack up milk, apples and cheese.

“I’m with you, Lulu.  How can I help?”  Brownie pranced behind Lulu, wagging his tail that brushed against the door as Mortimer opened it.

“I don’t need any help with the food, Brownie.  But you can grab a blanket for us.”  Mortimer was ahead of everyone, going out the door and into the sunshine.

Brownie grabbed a blanket from his bed and carried it in his mouth.  He tried to bark but it came out with just as a puff of air, muffled by the blanket.  His brown eyes gleamed with excitement.  He trotted closely behind Mortimer.

Oma took her time, looking at the birds and carrying the basket of food in her arms.  When all of them arrived at the park, Brownie led the way to a shady spot under a mulberry tree and dropped the blanket on the grass.  Oma put the food in the center of the blanket and each of them ate their fill.

As they wiped crumbs from their faces, Mortimer stood up and held his walking stick in front of him.  “Okay.  Now it’s time for us to explore the rocks by the waterfall.”

This was a challenge for Oma was did not like getting wet.  It took her a very long time to dry when she was washed. (337 words).

Pick one of the characters and compose a character sketch in a single paragraph
Gladys Worcestershire is a woman of her early 70s.  She dyes her hair jet black with a blue streak down the middle.  She wears her hair in a tight French twist.  She is bulky and short, shaped like the bulb of a turnip.  She works as a school crossing guard, wearing comfortable cargo paints in green with long sleeved yellow and white striped cotton t-shirts.  Her shoes are high top black converse sneakers with red ties.  She wears polka dot socks in red and white or blue and white.  She frowns at the traffic as she raises her stop sign for the kids who need to cross.  As they pass by, they “high five” her and smile.  While they are waiting at the curb before crossing, she spins off a tongue twister or knock knock joke.  She loves her day job.

At home, she has two cats, Bogart and Bacall, who fight for their spots on the kitty condo or sleep under the bed while Gladys is gone.  In the evenings, they curl on her feet and she reads aloud to them from Robert Louis Stevenson stories and poems. 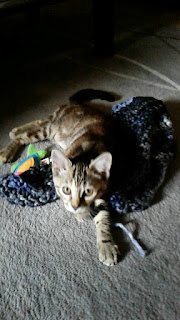 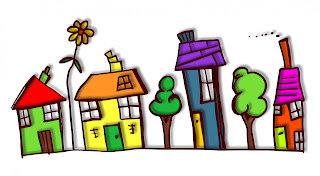 Posted by Anita C. Fonte at 4:25 PM No comments: Links to this post